No Widgets found in the Sidebar Alt!

Broadway is much more than just a street in New York City with a bunch of theaters on it. Yes, this is how the biggest form of theater in the world gained its name—Broadway is or was home to some of the most famous theaters in the world. But Broadway is much bigger than just a single geographical location, no matter how much fame and prestige that place might carry along with it. Broadway is about a quality of theater. It is about watching the greatest actors and actresses in the world, doing something that they love. It’s about some of the best musicians performing some of the greatest songs ever written. It’s about master craftsmen, technicians, and designers creating sets, sounds, and costumes.

Take the show Hamilton, for example. No one would argue that this is not one of the top musicals of all time. Today, it is being performed by professional actors on sets made by some of the top designers in the world on stages all over the United States. Broadway has moved beyond the Big Apple and can be found in Chicago, Los Angeles, and Boston. You can catch a show in Atlanta or Las Vegas soon, too. It might not be the original cast and crew, but that doesn’t mean that the show will not be comprised of some of the most talented performing artists in the world. Even the Richard Rodgers Theatre, where Hamilton has been playing in New York for several years, is technically located on 46th Street, and not Broadway!

The theater is more than just a place. If you really strip what a play or musical is down to the bare essentials, you don’t need a lot of things. You need actors performing somewhere—that’s about it. Broadway style acting is much more than actors on a stage, though. These shows are put on in large buildings with at least 500 seats. They have award winning scripts, professional actors and directors, and amazing, breath taking set designs. You can go and see an Off Broadway show if you wish and still have a great experience. Off Broadway does not mean bad; it’s just a smaller theater size. But there’s something unique about the type of show that a thousand people would want to see, night after night. A minor league sports game is fun to watch, but the highest level of professionalism is always a little bit better. 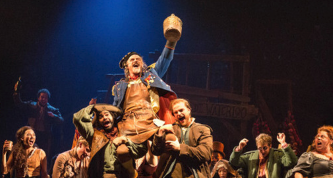 If the theater is your passion, then Broadway is the height of fulfillment. If you live near NYC, then you may have already been to a major show in the past. You might have been to several. Awesome! But you don’t need to give up hope if you live far from the City. There are many great shows in New York, but this is not the only place where great theater occurs.

If you’ve never seen a Broadway show, what are you waiting for? You don’t need to go to NYC to catch some of the greatest theater ever produced. No, you can experience it close to wherever you already are. And if the nearest city doesn’t have a large theater, that does not mean that there are not other shows to take in. Off Broadway might have originally referred to the smaller theaters that popped up near the original theater district, but today it just means that the show is being produced at a smaller—but still large sized—theater. So, if you’re a fan of the theater, you owe it to yourself to grab tickets to one of the most remarkable experiences you will ever see.